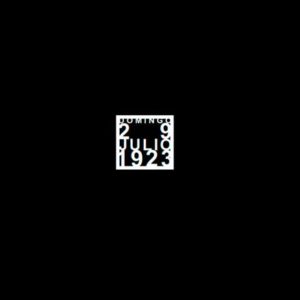 A case is a small box or wrap that is used to store things. It is generally used for small objects of a certain value.

This piece known as The Cosmic Star is a silver case with a crystal lid for a 5-pointed star-shaped cookie, specially made by Raymond Roussel. It is closed with a small padlock, also of silver, and joined with a ribbon to a parchment on which the date and the memory of a breakfast between Raymond Roussel and Camille Flammarion, in Flammarion´s observatory house . This case, this image and its appointment, is the starting point and origin of the project Sunday, July 29, 1923, a collaborative piece between Michaela González (goldsmith) and Antonio Arango (visual artist).

Also included are 3 photographic images with digital treatment made by A. Arango. The photographs are free interpretations of Roussell’s literature, specifically of his novel Locus Solus (1914), and an allusion to astronomy and Flammarion’s thought. Each image is printed by injection with pigmented ink on Hahnemühle cotton paper of 305 g. The series is titled Resurrectine, «… fluid that if injected into a recent corpse, manages to represent the most important incident of his life.

«Raymond Roussel in his posthumous book How I wrote some of my books (1935) reveals a secret which consists of the formulas for writing his literature. The secret consisted of an artificial mechanism of word games and phonetic combinations based on puns, homonyms and polysemies. The «unveiling of the secret» meant declaring something that nobody knew was kept, until it is discovered. So revealing was the confession that Foucault published the essay Raymond Roussel (1963) in which secrecy and hidden truth are part of the identity and sense of personal value that everybody must keep and maintain.

Sunday, July 29, 1923 talks about the use of the Case and its emblem as a final piece or work. The Case and the importance it has for the value it holds. Fetishism to protect, to possess a secret, a secret in its revelation even for ourselves, but that its existence or latent presence enhances the particular idolatry or respect we give to an object. Devotion to the material object, belief and worship for what it is and represents for each of us is a secret, a secret that only we know and often can not be revealed. What is certain is that the fetishism and the value for the secret that we all keep builds over the years the walls of a house in which we live and grow; a house where we do not live but we are, a house that keeps imaginary records of the value of our happiness.